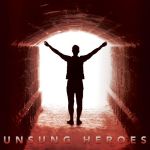 In the best picture winner The King’s Speech, we are invited into the story of King George VI and his unlikely rise to the throne. I say unlikely because he felt it was unlikely because of a speech impediment that he felt disqualified him from leadership of the United Kingdom. Then he met a speech therapist who help him to overcome the limitations he placed upon himself. In short, the king, with help from a friend, discovered his voice.

It can be tough and it does take courage. In the book of Numbers, a man named Zelophehad dies and his family will have no rights to his inheritance. You see, he had five daughters but no sons and according to the law of the land the daughters had no right to inherit anything. This wasn’t solely about land or money for them but about their own stake in the “promised land.”

They could have been content to simply go with the law of the land. After all, it had been the law for many years and even if it was unjust it was still the law. But these five daughters of Zelophehad do not settle for injustice and challenge both Moses and God for a stake in the future for not only themselves but for all daughters of Israel.

What voice has God uniquely gifted you with? What conditions break your heart to the point where you feel compelled to speak out, serve, and advocate for? What passion has God stirred in you so that you might challenge the status quo?

This Sunday, we will continue our Unsung Heroes series as we look at the Daughters of Zelophehad from Numbers 27:1-11. I look forward to seeing you and hope you will invite someone with you to church.