Chances are good that no one will forget where you were on September 11, 2001 around 8:45 AM Eastern Time.

I was at work, at the CareerBuilder.com office in North Atlanta. I had settled into my cubicle, returned email from the previous day and began to prepare for several appointments that I had scheduled for that day, when all of a sudden, people came running into the sales area of the building, telling us to come to the break room, to see what was happening in New York City. We had this break room in our office that held a foosball table, air hockey table and a big screen television. We had about 50 people crammed into this break room, watching what was going on, smoke billowing out of the towers 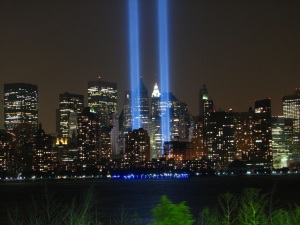 About an hour later, it was reported that a plane had crashed into the Pentagon. It was at the point that people felt pretty sure that the United States was under some sort of attack.

I remember standing there with my coworkers, some in tears, many of us angry, all of us in shock. We probably all stayed in that break room until about 11 AM. We didn’t know what to do. We knew that work would not go on as planned that day. By about noon, most of the office had cleared out, had gone home to be with family and loved ones.

We have a good family friend who was in New York City for work on that day. She was in a cab heading to the office before heading to the airport to fly home that evening. She recalls being in this cab and looking back and seeing smoke coming out of one of the towers of the World Trade Center. She could not get a cell phone call out to anyone for nearly four days and her family knew she was in New York. She recalls the smoke, everywhere you went, you smelled smoke. She recalls how strange, two days later it was to hear an airplane overhead. There were no cars really moving around Manhattan, and it was so strange and scary to hear that airplane flying over NYC.

September 11th, 2001 was a day that changed the course of history, not only for the United States but for the world. It is now eighteen years later. People who will be starting college next year were born after the events of that day. We continue to be somewhere between memory and hope.

Our sense of security was shattered on that day. Try telling a seventeen year old that it wasn’t that long ago that anyone was allowed to randomly wander all over an airport.We used to play a youth group scavenger hunt game at the airport. No more.

A good friend of mine, a very wise person has made this observation. It was on September 11th when the United States learned about the fear that a good portion of the world lives with in terms of violence and feeling threatened. It is a fear we still live with to this day.

It was also a day when most of us hear the term Al Queda and the name Osama Bin Laden for the first time, but certainly not the last. We realized just how small the world had become, although not neccsarrily the way in which we would have wanted to find out.

We were confronted with the seemingly random nature of life. In the days and weeks following the attacks, we heard the stories of the woman whose life was spared because she overslept and was late for work. We heard the story of one who lost their life because they came to work early. The story of the brave first responder who lost their life because they rushed into a most dangerous situation without blinking because that is what they do. The person whose life was spared because they were bumped from a flight.

On the Sunday after September 11th, Churches, Synagogues, Mosques, and other houses of worship were filled as people gathered to mourn, to pray, and to hope, to gather in our shared and fragile humanity.

We saw the worst in those who flew planes into buildings who believed they were doing the will of God.

We saw the best in those who gave of themselves in self-less service, those who showed enormous love, compassion, and mercy to those in need.

A lot has happened in the last eighteen years. We live somewhere between memory and hope.

I daresay in the moments and days that followed the attacks we saw many glimpses of the kingdom of God.

For many,  our introduction to Islam came on that day eighteen years ago. It is one of three religions that come from what is called the Abrahamic tradition, coming from the family of Abraham. These are Judaism, Christianity, and Islam. What all three have in common is that all three believed that God was revealed to Abraham in a unique way. All three believe in one way or another that God is the creator of the world.

To be sure, each religion has distinct theological differences. The major one for Christians is that we believe that God is incarnate in the life of Jesus Christ. We believe that Jesus is the Lord and Savior.

Just as in our scriptures, there are some beautiful words in the Koran:

God is the light of the heavens and the earth. The parable of this light is, as it were, that of a niche, containing a lamp; the lamp is enclosed in glass, shining like a radiant star; a lamp lit from the oil of a blessed tree ~ an olive tree that is neither of the east nor of the west ~ its oil is so bright that it would almost give light of itself, even if it was not lit by fire. Light upon light.”

Sounds familiar to some words of Jesus: You are the light of the world, a city on a hill cannot be hid.

I say this because I think it is important for us to recognize that to truly move forward in creating the world that God dreams for us, we must learn to work together with people of different faiths. We must learn to see what unites us rather than what divides us.

There is a truth that transcends all religious lines and that truth is that God’s will is always life. That is a truth that is firmly rooted in the eternal love and grace of God. Death never has the final word.

For Christians, the life of Jesus is a reminder that God’s will is life. 2000 years ago he gave of his own life for the kingdom of God that he was so passionate about. He gave of his life for a world that would be steeped in:

And finally a world marked by new life.

It is the call placed upon us to a hopeful people, to be a kingdom people to choose life, to bring about new life together.

So, the memory lingers. The pain remains.

The hope is real. God’s will is always life.